One client began craniosacral work because she was under a lot of stress. After her second session, she said: “Actually I have more pressure on me now than when we started, but I’m able to deal with it better. I’m more centered, I’m more calm.”

This statement says a lot in a nutshell about how craniosacral therapy often helps. We live in stressful situations, and so we spend a lot of time in the “fight or flight” part of our autonomic nervous system. Craniosacral work allows us to access the “renew and rebuild” part of that system. As a result, our physical health may improve too.

“Maybe it’s because I’m becoming more sensitive to it now that I’ve had a few sessions, but it feels like energy is being pulled up to the surface of my body.”

Yes, exactly. And it’s not only that you’re becoming more sensitive to what’s going on in your body. It’s also that areas of inertia have been released so that more of your own energy is actually available to you.

“I want to tell you, that session [her first] did wonderful things for me. And I felt lasting results that I’ve never felt before. I feel straighter, more energy flow, less anxiety. It’s a physical kind of anxiety this work takes away. And that allows me to relax mentally.”

After her first session, one client said, “It was amazing. I slept and slept. The next day I went to the library to work on a proposal I’d not felt physically relaxed enough to approach for months. It just flowed. I sent it right off, and I got back an offer the same day to become a consultant.”

“After last time [her first session], it was amazing, I slept so well. I don’t think I’ve slept that well in two years.

“I loved my session last week. I slept like a babe for 13 1/2 hours afterward. I can’t say I understand biodynamic craniosacral therapy, but my body loved it! Thank you again.”

Craniosacral therapy is great for migraines and other headaches.

“Having suffered from migraine headaches for most of my adult life, I looked at Margaret Connolly’s brochure for a year. I was unsure of trying this, but I had reached a point where headaches were causing me to miss time from work. The change of seasons was especially difficult. I made sure I had medication with me at all times.

“I decided to take a chance on craniosacral therapy. The first day I went, I was in the middle of an excruciating headache. I told Margaret I didn’t think I could be still long enough for her to work. She asked me to let her try. I reluctantly agreed. Within 15 minutes the pain had stopped. I was in complete shock. I thought that when I got home, the pain would return but it did not.

“I have not had a migraine in close to eight months. I am able to have a glass of wine again, my sleep is better and my anxiety level is much lower not having to worry about when the next attack will come. I recently realized I no longer think about having medication with me when I go out.

“I recommend Margaret Connolly to anyone who will listen to me.”

I first saw this client in 2009. In 2010, she took her last Imitrex, but she was still seeing me only now and then. In 2011 we did a focused program, every week for three weeks, then tapering to longer intervals between appointments. After seven sessions, I could feel that she was done, and she had no more headaches. As of 2015, she was seeing me once or twice a year when she felt migraine symptoms might be creeping up.

There are two words I’m accustomed to hearing from clients at the end of a craniosacral session.

One of these is “lighter,” as in “I feel lighter.” I doubt they’ve lost weight while they were on the table!

The other word is “profound.” Clients often use this word to describe their experience.

“This was one of the most profound experiences I have ever had. It was like being reprogrammed. I wasn’t expecting anything like this. I thought I would just lie there and maybe fall asleep while you did something to my head. Instead all kinds of memories that I haven’t thought about for a long time kept coming up, first of having my tonsils and adenoids out when I was a child, and that was an operation that had to be repeated. And then of having a mastoid operation that was very serious.

“And at first this was unpleasant and I felt, ‘I don’t want to think about this!’ But then I realized it was a healing process and I could just go along with the healing. ‘Let it go, let it go!’ I also felt all kinds of little jerks and twitches and I realized, ‘This is working on the autonomic nervous system.’

At the end of her second session this client said: “I was feeling a lot of forgiveness. The best way I can participate in this healing process is to let go. I’m relaxing into the process. I’m more comfortable with it.” 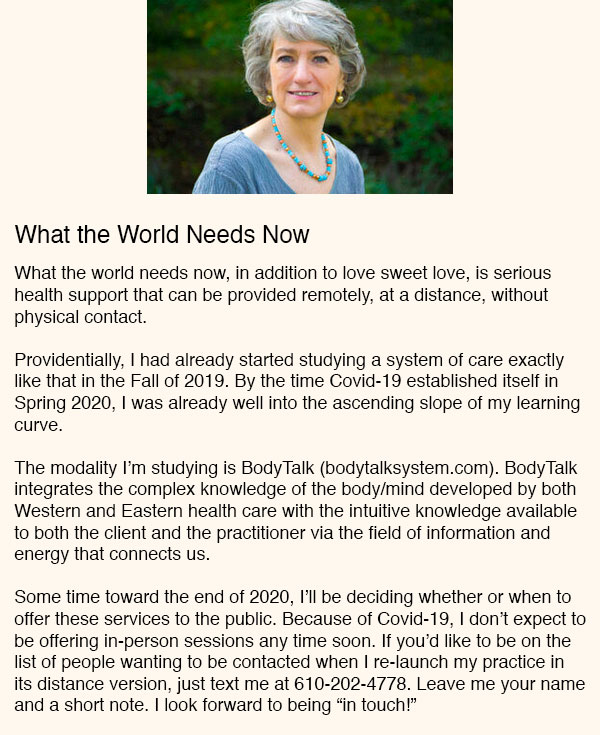